My guess is that the beef lobby hates us. If you hadn’t heard, the National Cattlemen’s Beef Association FREAKED out when a USDA internal, online newsletter mentioned the words “meatless Monday.” Apparently that’s the equivalent of saying an incantation to bring Satan, himself, up from hell.

We are those people that usually prescribe to Meatless Monday. And more often than not Meatless Tuesday, Meatless Wednesday…. It’s not that we don’t like meat. We love it actually. We’re not vegetarian but if someone was just looking at our daily menus 5-6 days a week they might just think we were. I have two eggs for breakfast and Tom has oatmeal. Salad or leftovers for lunch. Usually some nearly all veggie dinner with some pasta, potatoes or rice thrown in for good measure. Meat is special to us. The meat we choose to eat we’ve either raised it ourselves, got it through hunting (read: hard work and not necessarily a dependable source) or purchased it from a sustainable rancher (read: costs more than my college tuition). Even though we have a chest freezer so full of meat that we have to put something heavy on it to make sure it stays closed, we are hesitant to eat much of it. 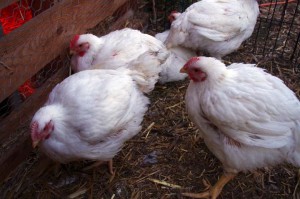 These 5 broilers lasted us about 5 months.

Yes. We are meat hoarders. We eat it just fast enough that it doesn’t go bad, which can be quite awhile when you vacuum seal it. We’ve still got some pork in there from over a year ago. Then we have the wild boar that Tom got and a bunch of meat chickens we recently raised. Oh, and rabbits, ducks, stewing hens, parts of a wild turkey and maybe a wild goose, and some pheasant that Jeanette may have left. Let’s not forget all the carcasses that I save to later make stock once I have enough. For the average American family it’s probably just a few months worth of meat. For us, this will most likely last us well over a year.

Raising your own meat animals isn’t easy. We recently helped teach some people how to humanely slaughter chickens. There were tears shed and prayers said. We’ve taught a lot of people over the last few years how to do this, mostly it’s because someone’s chicken is terminally sick or fatally injured and they need to dispatch it as quickly and as humanely as possible. If you own chickens it’s an important skill to have even if you don’t ever plan on raising birds for meat. We never look forward to it and we usually take quite awhile before we can eat meat again. This is the primary reason why we don’t eat very much meat. It’s such a emotionally exhausting experience but we feel, for us, it’s better to do it this way because we won’t ever give up meat 100% and we know how these animals lived and died.

And for the record, 14 year old boys melodramatically state that you’re forcing them to become a vegan if you don’t serve them meat at every meal. True story.