I had received this wonderful book called Homemade Cheese: Recipes for 50 Cheese from Artisan Cheesemakers by Janet Hurst to review. I’ve been making some cheese with our goat’s milk but not very much because they don’t produce a lot. I wanted to get more practice but it was going to take us a while to stock up on goat milk.

The thing I really enjoyed about this book was that it was written by a goat owner so most of the cheese recipes could be done using goat milk. For each recipe she also includes with each recipe what equipment you will need for that type of cheese. The only issue I did find was that she didn’t tell you how many molds you needed for each recipe.

At the time I received the book I had only tried mozzarella, chevre and Monterey Jack. Both came out well but I’m such a sucker for soft cheese. 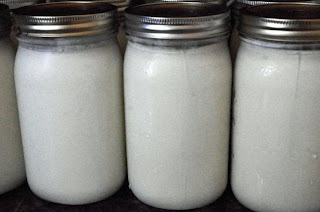 Soft cheeses, like brie can be difficult to make. But I guess you could say I’m a bit of an overachiever. I didn’t, however, want to do just a brie. I had my heart set on doing Bucheron, which is an aged chevre. It’s difficult to find and one I had really never heard of. I definitely had never seen a recipe for it before. This recipe was going to take 3 days to make so I made sure to do it on a weekend I was going to be home for. It required 2 gallons of goat milk which was going to take us quite awhile to stockpile. To stockpile raw milk we simply froze quart jars of it as we collected it until we got all we needed.

I had 4 small molds for making chevre, which ended up being enough. Five molds probably would have been more ideal though because I was really having to cram the curds into the four to make them fit. I also needed cheese mats, and a food grade plastic box to allow the cheese to retain moisture and keep the cultures from contaminating the wine fridge.

The first thing I had to do to make it was pasteurize the milk since it’s a soft cheese and isn’t aged long enough. I really hate pasteurizing milk just because it can take so long but if I wanted to make this cheese I was going to have to. 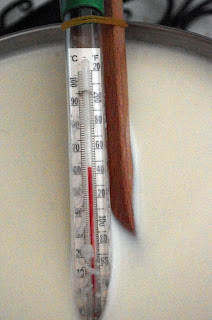 To pasteurize you need to heat the milk to 145 deg F and hold it there for 30 minutes stirring to keep it evenly heated. I find that my floating brewing thermometer works best for this but I have to rubberband it to the stirring spoon because my pot isn’t deep enough for it to float. After the 30 minutes is up you want to cool it off as quickly as possible in an ice bath. I cooled it of to 86 deg F so I could inoculate the milk without reheating it.

Once the milk was down to 86 deg F I simply added the cultures, stirring until well blended. I then added the rennet stirring up and down. I left it overnight to firm up.

Without cutting the curds I scooped them into the molds filling them. The molds only took about 2/3s of the curds. I let the curds sit for just over 4 hours and then refilled the molds, packing the rest of the curds in. I allowed them to sit overnight to completely drain. The next morning I removed the curds from the molds and brined them for 10 minutes.

The brine was made up of 2 pounds of noniodized salt mixed into 1 gallon of water. Heat up the water until it’s nearly boiling and mix in the salt until it’s dissolved. When it cools some of the salt may precipitate out. You know the salt content is right when the cheese floats. If the cheese sinks there’s not enough salt. This is good to know because you keep the brine to reuse – adding water and salt when needed. Over time it will develop it’s own character from whey and cultures that are slowly added with each batch of cheese. Some cheesemakers have had the same brine for decades. 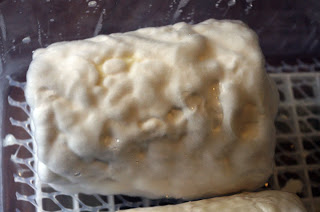 After I brined the cheeses I laid them on the cheese mats and put them in the box. The first day I repositioned the cheeses several times. I put the box in my wine fridge set about 55 deg F then for the next week I turned them to make sure they were evenly drained and allowing the mold to develop evenly over the cheese. 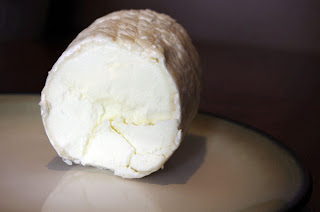 After three more weeks of aging the cheese was ready. It was much milder than chevre. It no longer had that bite that I associate with goat cheese. It was distinctively different from brie though being more delicate. It’s not creamy like brie either. It’s a delightful cheese that I will make again.