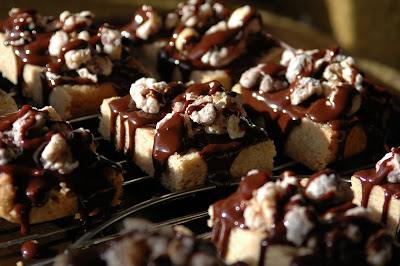 Last weekend Rick and I took a trip up to Tomales Bay to check out some land belonging to a client of his. She informed Rick that while we were in town, we MUST stop at the Tomales Bakery (sorry for the facebook link, but they don’t have a web presence of their own) and have some tasty snacks. Boy, am I ever glad we did!

The Tomales bakery is a small place, with barely enough room for 2 people to wait in line at the counter. The decor is simple, with hand-painted signs and pastry displays that are left to speak for themselves. No frills here. But OH, the food. I mean, the whole place smells like BUTTER. 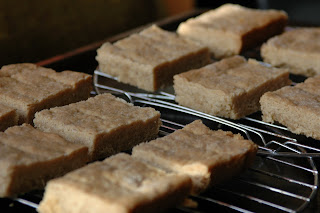 *drool*
We got there a little late on a Sunday (the first thing we saw upon entering was a sign that says “Open: 7am. Close: When we run out”), and most of their offerings had already been swooped up by the many travelers and bicyclists taking advantage of the gorgeous weekend weather. From what was left, we picked out a nutty, chocolate fudgey shortbread bar (4 kinds of nuts!), and some ridiculously delicious coconut macaroony sort of thing (heavenly).
I knew at the first bite that this nut bar was something I was going to have to figure out how to make: a salty, flaky crust with soft, sweet chocolate and large pieces of crisp, crunchy caramelized nuts. I packed the last bite away for further analysis at a later time, and we went on our way.
Up at the “farm”, we found wild thimbleberries, native blackberries (neither were ripe yet, of course, but we’ll keep them in mind), and heaps of pineapple weed from which we foraged a large bunch of flowers to make tea. The land was beautiful, with an enviable view of the ocean.
Below, I have written my adaptation of Tomales Bakery’s shortbread bars. They say imitation is the sincerest form of flattery, yes, but I know I could never beat them at their own game. Instead, I have used the memory of that sweet confection to create something of my own (and within my own means): call it a…homage. 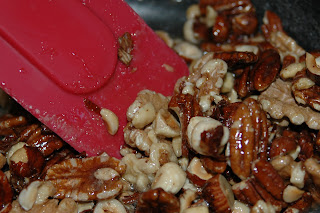 I’ve substituted whole wheat pastry flour and brown sugar for the traditional white fare, and made an amaretto/dark chocolate ganache instead of the more fudge-like chocolate used at the bakery. Instead of a caramelized nut layer, I’ve opted to make a crunchy praline-type topping. All-in-all, I think they came out quite well.
Chocolate Nut Shortbread Bars
for the shortbread:
1c (2 sticks) unsalted butter, softened
1/2c firmly packed brown sugar
2c whole wheat pastry flour (preferably fresh-ground, very fine)
1 tsp vanilla extract
1/2 tsp salt (1/8-1/4 tsp if using salted butter)
1 large pinch of coarse sugar (optional)
for the nuts:
1/2c halved walnuts
1/2c halved pecans
1/2c halved hazelnuts
1/4c white sugar (or any evap. cane juice that caramelizes well)
1-2 Tbsp water
for the ganache:
10 oz. dark chocolate, cut into pieces (I used dark chocolate chips)
1c heavy cream
1 Tbsp amaretto (dark rum, bourbon, or any flavored liqueur would be good here)
Line a 9″x9″ cake pan (or similar-sized casserole dish) with parchment paper, folding the corners flat against the sides of the pan (the paper will be unwieldy until the dough is holding it down). Don’t worry too much about perfection here – the parchment will flatten itself out when you press down the dough. 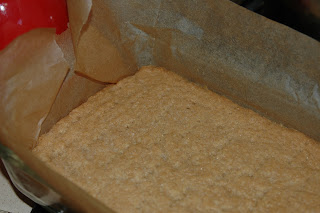 In a stand mixer or large bowl, cream together the brown sugar, butter, and vanilla. Mix until thoroughly combined. With the mixer on low, stir in the flour a bit at a time until a stiff dough forms. Because there’s no egg in this, you may safely taste the raw dough and spice/salt to your preference. I like my shortbread a little on the salty side in this recipe, since the nuts and chocolate are so sweet.
Press the dough into your lined pan, making an even slab (about 3/4 in. thick), with the parchment folded securely against the pan. Make sure no dough is stuck behind the folds, or it will burn. If the dough sticks to your hands during this process, you can flour them or coat them in powdered sugar before pressing the dough down. Use a large fork to perforate the shortbread so air can escape, and sprinkle the top with a little bit of coarse sugar.
Bake at 325 degrees for roughly 40 minutes, or until the shortbread is golden and has stopped bubbling (you will see the dough rise/puff as it cooks, and fall once the dough is cooked through). Allow the shortbread to fully cool before turning it out of the pan, then cut it into bars. This shortbread can be made several days ahead of time, but it is hard to keep it away from snacking roommates/significant others/house guests/yourself for very long.
To save time, you can pre-toast the nuts while the shortbread is cooking. Pour all the halved nuts onto an ungreased baking sheet with sides (I like to line it with parchment for easy cleanup) and put them in the oven with the shortbbread. Turn every 5 minutes until the nuts are just barely starting to brown. 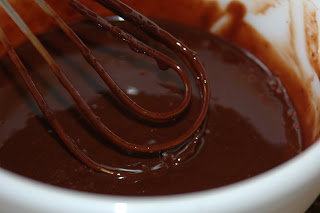 Meanwhile, heat the white sugar and water in a non-stick pan over medium heat and allow to simmer until all the sugar is dissolved and the syrup starts to become golden. Then stir in the nuts until they are fully coated. Immediately pour the nut mixture back onto the parchment paper and spread the nuts out to dry. If you like, you can spice them while they are hot, or put them back in the oven to caramelize the sugars more heavily.

To make a basic ganache, heat 1c of heavy cream in a saucepan until just boiling (be careful not to boil too long or it can get VERY messy). Place 10 oz of chocolate (chopped into smallish pieces) into a deep bowl. Pour the hot cream over the chocolate chunks/chips and whisk until smooth. Add booze to taste after the chocolate and cream are incorporated, and allow the mixture to cool/thicken.
To assemble the bars: 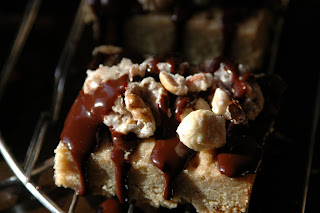 Place the cut bars (I made 12 bars roughly 2″x3″) onto cooling racks over a baking sheet (to catch drips). Leave space between each bar. Drizzle the cooled ganache over the bars, and top with pralined nuts. If refrigerated, the ganache will harden enough that it will not drip. At room temperature, they can be a little messy (though not unmanageable).