When I first met Tom he was a lager drinker – primarily Heineken. Back then I was regularly making beer. I’m not quite sure why I make beer because I don’t drink it (bad experience in college turned me off of it). Tom quickly changed into a beer snob. Yes, I created a monster. But that’s ok, he helps keep me brewing. I’ve always been one to just use malt extract kits from Beer, Beer, and More Beer. They are easy and cheap. All of the ingredients that you need are included and premeasured. And the bonus is that they are always consistent. We even used these kits to make all of the beer for our wedding (Scotch Ale, Imperial Stout, and Hefeweizen). I also made a hard cherry cider that was apparently a huge hit. Our guests blew the keg before the reception was over.

But no more! This week I finally delved into making my own recipe. Using the basic guidelines for ale found in The Complete Joy of Homebrewing Third Edition (Harperresource Book)

I developed a recipe for a Honey Apricot Ale. We brewed it on Tuesday and I’m looking forward to trying it later next week. I’ll continue doing my own recipes and hope to eventually graduate to mini mash brewing.

Don’t worry, I’m not going to tease you. Here is a basic Strong Scotch Ale Recipe that you can make:

First off, if you don’t have homebrewing equipment you’ll want to get a kit. Most fermentation supply companies have them or you can order online. It’s a bit pricey, but the investment is well worth it! It will make 5 gallons of beer and even with the cost of ingredients it will pay for itself quickly if you love good beer. You will also need grain bags and hop bags and 24 22-oz bottles and caps (if you’re bottling) or a 5 gallon Cornelious Keg and accessories.

Note: It is EXTREMELY important to sterilize anything that comes into contact with the beer after the boiling stage. If you don’t sterilize you will end up with vinegar or just a vile, off tasting drink. 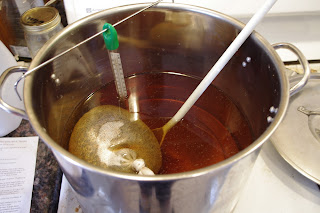 1. In a 5 gallon kettle add 2-3 gallons and grain in grain bag. Heat water with grain to 170 F taking about 30 minutes to do so. If it heats up faster than that, keep it at 170 F until 30 min. is up.
2. Remove grain bag and bring water to a boil.
3. Remove from heat and stir in extract. You want to remove it from the heat to keep the extract from burning on the bottom of the pot. You now have what’s called sweet wort.
4. Bring mixture up to a boil. Keep an eye on it because it will foam up and create a sticky mess. If it starts to foam reduce the heat until the foam goes down and then turn the heat back up.
5. Once the mixture is boiling add the hops in the hops bag. Boil mixture for 60 minutes.
6. With 20 minutes left in the boil add the Whirfloc tablet. This will bind with proteins in the wort to help clarify the beer.
7. Once the boil time is complete cool the wort off in a cold water bath to 130 F.
8. Using the funnel, pour the remaining water into your carboy followed by the sweet wort. Using a sterilized sample taker, remove some of the wort and use it to take a hydrometer reading.
9. Add one container of yeast to the wort (called pitching the yeast). Put water into the airlock up to the line, cap it, put it into the stopper (or carboy hood) and plug the carboy. Shake carboy for approx. 2 minutes to oxygenate wort.

10. Place carboy in a dark, cool place for several weeks. After the first 10 days start taking daily hydrometer readings with the sterile sample taker (follow instructions for use and sterilize before using). When the hydrometer readings are static it’s time to bottle. This is important because if there is still too much sugar in the beer your bottles may explode after bottling.
11. Using the sterile siphon starter and transfer tubing (Make sure to sterilize first!) start siphoning beer into the sterile plastic bucket (called racking) making sure to not suck up the dead yeast on the bottom of the carboy. As the level gets lower you can gently tilt the carboy to avoid the dead yeast.
12. Boil 1-2 cups of water. Dissolve corn sugar in boiling water. Let cool and add to beer in bucket. Pitch the remaining container of yeast. I prefer to pitch this second yeast for better carbonation results when bottling.
13. Sterilize bottles. Hook up transfer tubing and bottle filler to spigot on bucket and start filling bottles. When using the bottle filler, just touch the bottom of the bottle filler to the bottom of the bottle. Fill all the way to the top of the bottle. This will allow the proper head room when you remove the bottle filler from the bottle. Using the bottle capper, add sterilized bottle caps to each filled bottle.
14. Store bottles in a dark area for 2 weeks. This allows the beer enough time to go through a secondary fermentation and become carbonated.

If you have a kegging system, simply fill a sterilized keg with the beer without adding the yeast and corn sugar. Click here for directions on kegging.