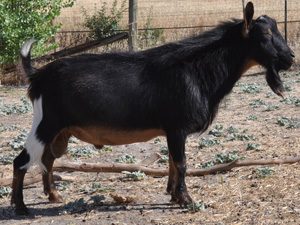 I had my suspicions that Maggie didn’t settle. She fought being bred and only let the buck cover her once before throwing a temper tantrum any time he got near. Well, lo and behold Maggie went back into heat. Due to scheduling issues for everyone, we were not able to take her back to Graupel to get bred. That is the biggest downside of not having your own bucks, you can’t breed them without affecting someone else’s schedule. So instead we took her on over to Castle Rock Farm and bred her to Castle Rock Black Oak *S. She fought that breeding too (even though she was in standing heat both times) but Black Oak was able to get the job done not once, but three times. Let’s just hope she settles this time.

Black Oak has some attributes that I really hope he passes along to their kids. He’s long and level with a nice flat, wide rump, which is something that Maggie could use some improvement on. He also has good angularity, brisket extension and front leg placement. His dam, GCH Castle Rock Sarafina 2*M 2*D AR2533 has one of the flattest and widest rumps in the Castle Rock herd. She is a very elegant doe and tied one other doe for the highest “dairyness” score in the Castle Rock herd. She has a very nice udder arch and a capacious udder. Black Oak’s sire is Castle Rock Pound Foolish *S whose dam is SGCH CRF Castle Rock Penny Wise 1*M 3*D VVEE90. I have long admired Penny Wise who got a Top 10 award in 2011 for the 305 day milk test for milk, protein and butterfat. She has a very capacious udder with a strong MSL, large teats and open orifices. She is very, very dairy with good angularity, flat bone, and spring of rib. Penny Wise has also scored high on rump angle and width for linear appraisal.

Fingers crossed that she settled this time so she can make it to Linear Appraisal and REDGA.