Our meet your farmer posts feature a small family farm that we feel exemplifies the type of food system we all need to support. They show passion and dedication to raising and growing food sustainably. 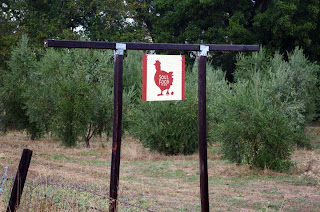 This past weekend we got the amazing opportunity to visit with Alexis and Eric, owners of Soul Food Farm in Vacaville, California. They primarily raise chickens for eggs and meat along with having an olive orchard. We’ve visited their farm twice in the past for their Artisan Beef Butchery Event. While those events were fantastic, and I highly recommend them, we never really got a chance to talk to Alexis or Eric about their farm. 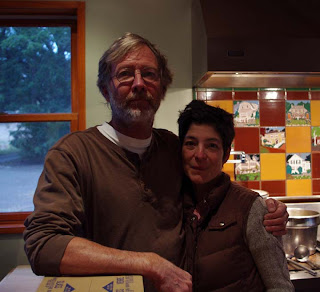 What was great about this visit was that we got to talk with them one-on-one. Alexis shared with us how they started and what trials they’ve endured along the way. Unlike other experiences we’ve had talking to farmers, we got a real good sense about what it takes mentally, physically and financially to become a sustainable farmer. Did it scare us from our dream? Not at all. I think having some insight about what we will be up against in the future when we decide to start farming will definitely help us.

Alexis, originally from Danville, was living in Vallejo (with a quarter acre lot like us) when she saw that the 54.5 acre property went up for sale. It took her two years to talk Eric into agreeing to purchase it. The first year they commuted from their Vallejo home to the property but realized they weren’t making the trip enough so they sold their home and moved onto the property. The farmhouse had long ago burned down so they spent their first years living in tents and trailers until they could build their house.

Their decision to raise poultry was rather serendipitous. They had chickens but it didn’t become an income generator until one of their workers decided to take some of their eggs to Chez Panisse in Oakland. That got the ball rolling and before they knew it they were supplying eggs to some of the best restaurants in the Bay Area. Eventually Chez Panisse asked them to branch out into raising meat birds saying that if they liked the birds they would buy them. Alexis expressed her reservations about taking meat chickens on. She would have to front all of the money to start the operation with no guarantee that she would have a buyer.

The profit margins are very thin on pastured birds, especially the meat birds. The increased cost of feed made it that much tougher. They also didn’t have summer irrigation (which they are currently installing) to help offset the costs of feed. After a tumultuous year, last year they decided to stop selling wholesale and focus their efforts on their CSA and farmers’ markets.

They raise a large variety of egg layers included Ameracaunas, Black Austrolorps, Barred Rocks, Rhode Island Reds, and Delawares. During the height of summer they produce 1,800 eggs a day. But unlike CAFOs, they do not force molt their hens so the eggs are seasonal and the number drops dramatically when the days become shorter. As their egg production goes down the amount of feed the chickens require goes up, which is why pastured eggs cost more than factory eggs.

Their meat birds consist of Freedom Rangers which are a slower growing meat bird. Instead of slaughtering at 8 weeks, they are processed at 10 weeks. They dress out at 3-4lbs each. The meat birds have the slimmest profit margin, which is making them rethink raising them.

It has definitely been a learning process for them. If they could have done it over again Alexis said she would have gone back to school for Agriculture and marketing, reached out to more women farmers (who tend to be more supportive of each other in her experience) and put in the irrigation right away. In the end though, while it’s hard work they love it and couldn’t think of doing anything else.

They are planning big things for next year including turning one pasture into an herb farm, planting more lavender and offering classes. They also hold events throughout the year like the ones we’ve attended. Definitely check them out. You can find them all over the Bay Area at Farmers’ markets and they have CSA pickups in San Francisco, Emeryville, Vacaville, Sacramento, and Napa. They are definitely a farm worth supporting.