This week’s post is from Stacy G. from West Sacramento who has the blog In Search of the Finer Things. She discusses why she became an urban farmer and what that first year was like 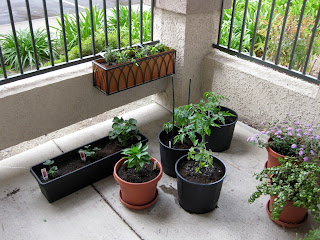 Tomatoes were the gateway drug. There I was, a young footloose apartment dweller with no lawn, no pets, no kids, and enjoying my apparent freedom, when one day the memory of a homegrown tomato came back to me. I had read just finished reading Michael Pollen’s “The Omnivore’s Dilemma” and was becoming more aware of food issues, including the poor management of agricultural land and the distance (both physical and emotional) between us and what we eat. I began to muse on a memory of the superior flavor and fragrance of the tomatoes we used to grow in our garden when I was younger. Motivated by my stomach, I headed to the nursery and bought 3 heirloom tomato plants, along with a handful of other edibles.

Beginning with those tomato plants, I started a modest garden on my mostly shady balcony. Soon I added an herb window box and filled it with parsley, basil, thyme and mint. Sage and rosemary eventually won their own private pots alongside the window box. During the fall I grew foods like bok choy (very well) and beets (not too well). Some things did well (potatoes and pea shoots); others not so well (bell peppers and strawberries), due to limited light and pollinators.

That summer, I bought a vermicomposting kit at the State Fair and after some initial heebie-jeebies, got over my aversion to keeping it inside the apartment, where the worms wouldn’t fry in the hot Sacramento summer heat. In time, we began adding worm castings to our pots of soil for additional nutrients.

Around the same time, my husband helped me construct a composter out of an ordinary Rubbermaid container so we could compost our kitchen scraps. With the possible exception of garden pests, nothing has given us as many headaches as compost. Before we understood the importance of air circulation in the decomposition process, we added a particularly rank batch of scraps to our compost bin that had been stewing away, sealed up tight for about a week. Like the green fog of death in “The Ten Commandments”, a scent like unto dead bodies mixed with poop began to pervade our balcony, then our apartment. To escape the awful stench, we literally barricaded ourselves in the back bedroom with a towel wedged in the door jamb and waited until the night breeze began to clear the air.

I almost felt sorry for our neighbors throughout these experiments, like when the gnat infestation in our compost bin must have traveled upwards to pester anyone on the balconies above our bottom-level apartment. Then again, our neighbors did their fair share of polluting the air with noisy parties and excessive competitive video game playing, so our remorse wasn’t compelling enough to stop our urban farming experimentation. 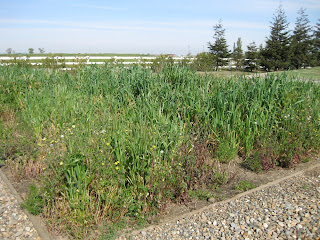 My family happens to live on 5 acres a few minutes down the road from our apartment, so I soon began preaching the gospel of urban farming to them. They didn’t get my obsession, but they let me amend a patch of soil out back and plant a big garden this summer. They also let me harvest their fruit trees, pineapple guava bush (which no one even knew was edible before), and perhaps most mysteriously to them, even their sheep and goat droppings, which looked like excellent free manure to my eyes. 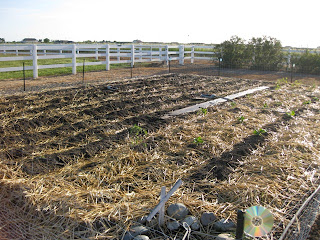 I convinced my parents to invest in grass-fed beef – a Black Angus steer and cow which keep the grass down for now and will be harvested next fall- and am currently singing the praises of free-range chicken eggs, an experiment they tried once before without a proper chicken coop/run and lost all 3 hens to the local coyotes. I hope next spring we can build a proper home for a new set of chickens and enjoy those wonderful orange yolked eggs again.

Eventually, our apartment balcony became so crowded with containers growing food that I nearly tripped every time I had to go out and water them. “We need more room,” said my husband. Last August, we finally moved to a modest suburban house. I brought the containers with us to tide us over until we can install raised beds. Since August, I have planted strawberries, rhubarb, chives, lemon balm, lemon verbena and comfrey at our new place; blueberries and dwarf fig and persimmon trees are on the way. The house came with a neglected orange tree that we hope to coax into production eventually. Potted Meyer lemon and kaffir lime trees sit on our patio and we hope to add lots more citrus trees and edible perennials with time. 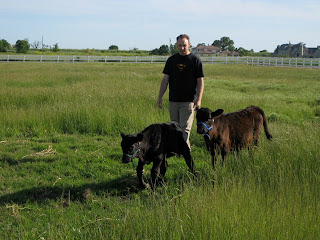 This spring will bring the biggest challenge of all: growing a garden entirely from heirloom seeds, but we are ready for a new experiment, and grateful to finally have a place to put down our roots. I get so much enjoyment from cooking seasonally and preserving our harvest. We have roasted potatoes and pea shoot pesto in the spring, ratatouille and bruschetta in the summer, stir fries and soups with greens when the weather gets cold – what more could you ask for? True, we have had our share of crop failure and bad weather; we have battled fruit flies, gnats, cucumber beetles, leaf miners, slugs, snails, rabbits, and spider mites. Sometimes we have been frustrated and even disgusted with nature, our efforts, or both. But at the end of the day, growing my own food makes me feel alive and connected to nature. Urban farming has become a way of life for us, and we will never look back.