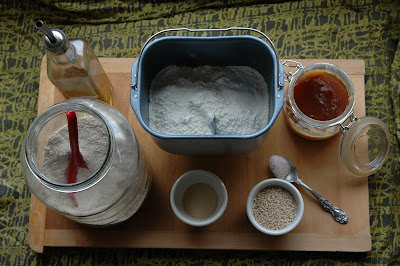 I never thought I’d say I was an accomplished bread maker. Baking good bread requires patience, skill, and an adherence to recipes that I have (sadly) never possessed. So I am as surprised as anyone to announce that I think I have finally mastered bread making.

Well, that might still be a bit of an overstatement.
I should say, bread and I have come to some agreements. Namely, I will not try to do anything too fancy or ambitious. In return, the basic loaves/rolls/baguettes that I make will not liken themselves to bricks, lumps of coal, pieces of foam rubber, or chalk. In this armistice, I think bread and I have finally made our peace.
I’ve been promising this recipe for weeks now, and have been hung up on how remarkably difficult it is to photograph dough and bread (or anything else white, beige, taupe, or cream) dynamically. All of the photos I’ve taken seem washed out, or are just a tad blurry around the edges. I apologize for the delay, and I hope that the final images (and the recipe) are now worth all the waiting. 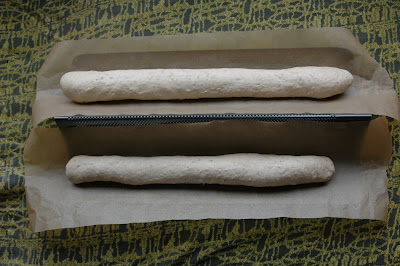 One thing I should say at the beginning here is that I now cannot live without my baguette pan. It is technically my roommate’s pan, but I know deep down in my heart that their relationship won’t last. What we have (the baguette pan and I, I mean) is true love and unwavering devotion. No roommate could stand between us.
And if not…well, it’s not like they’re expensive. I can get my own. Ahem.
But I’m serious here. Get a baguette pan. It will change your bread-baking life. Just remember to also get some parchment paper. Lining the trays with parchment means there’s nearly no cleanup – simply slide the bread off the tray, let it cool down, and put it away. And the parchment can be re-used several times. I just fold it up and keep it in the drawer with the rest of the roll.
While we’re on the subject of tools, I will again make my argument for the strongly-debated bread machine: I love it. It’s a time-saver, and it takes a lot of the guesswork out of the rising/kneading processes of your bread dough. It is the difference, for me, between making my own bread and having to BUY it because I don’t have enough time to make it. 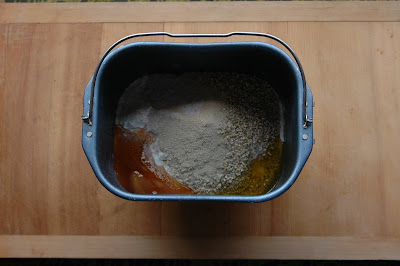 Yes, a bread machine can be a crutch…and yes, the bread that gets baked in it comes out looking like a little carb-cube with a depressing/laughable prolapse in its base.
But for making and rising dough, nothing can compare. The set mixing/kneading times, the stable and reliable temperatures, the no-babysitting rise, and the easy cleanup make this one of the most valuable tools in my kitchen arsenal.
Of course you can make this bread in a stand mixer, or by hand in a big bowl. I’m not saying it can’t be done. Personally, though, I don’t have the time or the energy to pull out all the stops and make bread that way (and clean up from it) twice a week. So I stick with the bread machine, but I shape and bake the dough by hand. I think it’s a good compromise.
**EDIT: Alanna made this AMAZING caramelized apple bread pudding out of the leftover baguettes I gave to her – YUM!**
Whole Grain and Honey Baguettes
makes 2 baguettes, or 6 full-size sandwich rolls
1 1/2 c tepid (not too warm, but not cold) water
2 1/4 tsp rapid yeast
2 1/2 c unbleached white bread flour
1/2 c whole wheat bread blour
3/4 c whole or steel-cut grains*
2 Tbsp honey
2 Tbsp olive or sunflower oil
1 tsp salt (or more, to taste) 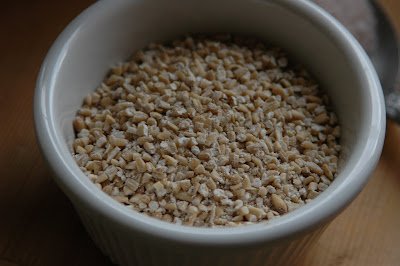 *A note on grains/texture: I like my bread to have some personality and not just be…fluffy. I have experimented with many additional ingredients including coarse corn meal, wheat germ, rolled oats, and crushed nuts. The best fit, though, came in the form of breakfast cereal: steel cut oats or other coarse-ground grain mixes are the perfect size and consistency to plump up during the dough’s rising process but still maintain a bit of a crunch in the final baguettes. I’ve recently been buying a 12 grain mixture in bulk from Rainbow Grocery, a local coop, and have added some sunflower seeds to the mix as well. I’ve left the recipe open to interpretation here: you can add 3/4 c of any number of raw or cooked grains. Bear in mind that larger grains (like whole wheat berries) will need to be soaked somewhat before adding to the dough, and anything very dry/large/hard will require a bit more water to hold the dough together.
If you’re using a bread machine, just dump the ingredients into the pan and run the “dough” setting. Mine takes about an hour and a half, and finishes at the end of the first rise. You’ll want to check the consistency of the dough about 10 minutes in and make sure it is not too wet or dry. These levels can be simply adjusted with water/flour. Bear in mind, though, that the dough will seem a little on the wet side until the grains have a chance to soak up the available moisture. 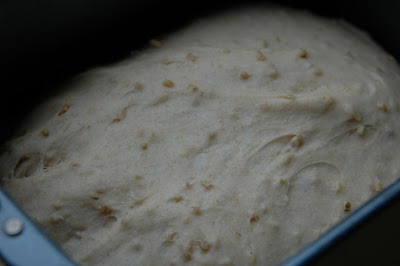 If you’re making the bread by hand, you’ll want to knead all the ingredients together, let it sit for about 20 minutes, and then knead again for at least 10 minutes. Allow the dough to rise, covered, in a warm area (I use my oven with the pilot light on when I hand-make dough). 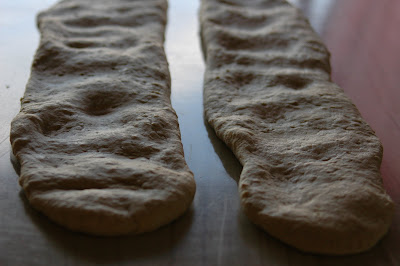 Once the dough has doubled in size, turn it out onto a flat surface (I generally don’t use flour, as my table top doesn’t stick to bread dough for some reason), and split the dough in half.
Make each half into a snake roughly the length of the baguette tray, and then flatten it out to make a long rectangle (mine come out about 5-6″ by 20″). Fold the dough lengthwise into thirds making a long roll. Place the roll open-side-down into the baguette tray lined with a strip of parchment paper. Repeat for the other half of the dough. 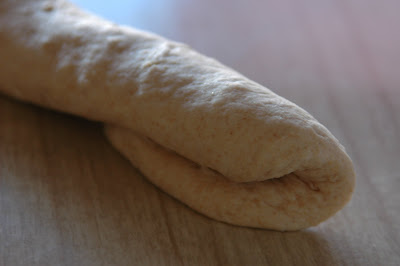 Cut some slits into the top of the baguettes, and place them in a warm area to rise (again, I use the oven). After they have increased in size by at least 50% (takes about 45 minutes – you can let them rise more if you like your bread very light and airy), turn the oven on to 350 degrees. Bake the baguettes for about 15-20 minutes, or until they are golden brown and the crust is somewhat hard to the touch. 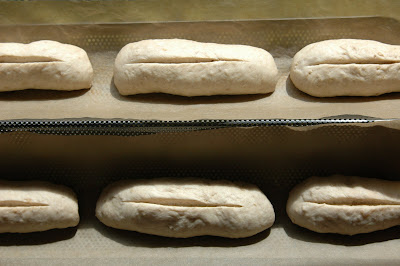 If you like crusty, hard baguettes, allow these to cool in the open air. If you like them softer, place a dish towel over the baguettes while they are still in the tray, and let them self-steam a bit while they are cooling. Stored in an air-tight container or bag, these will keep for about a week, provided they are cool and dry. 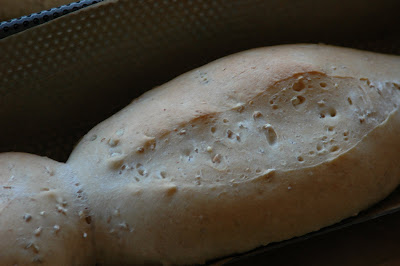 Extrabonuscool: Check it out! You can make sandwich rolls using a similar method! Separate the risen dough into 6 parts, and roll each of them into a 6-8 inch snake. Flatten these out into rectangles, and roll them up in thirds, with the open part towards the bottom. Place these in the baguette pan, with three on each side, leaving as much space as you can between them. Cut a slit down the top of each roll. Rise and bake these the same way as the full-size baguettes. Once they are cooled, tear them off (they will have attached at the ends a bit) and store in a zip-top bag for several days, or freeze for later use. 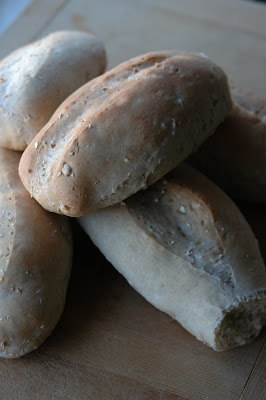 10 thoughts on “Perfect Baguettes, Every Time”