About 3 months ago Kate, from Living the Frugal Life posted on her blog about how far they had come in terms of self sufficiency. For those 3 months I’ve been wanting to do a similar post, but just haven’t gotten around to it. Well, now is the time. So here goes some of our list:

Water– Nope, definitely not self sufficient. We are totally relying on City water. At one time I had big dreams of hooking our well up to solar power and running it off the grid. That was, of course, until we found out we had salt intrusion thanks to all the big wineries up valley in Napa what are sucking all the ground water out and pulling the bay water into the aquifers. We do have plans to put in a rainwater and greywater system though, to help offset some of that water usage, particularly on the crops. But with all of our current projects going on, it’s on the back burner for now. 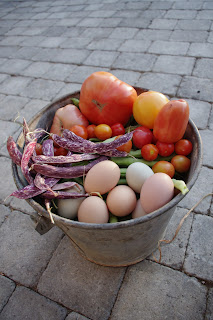 Food– While we are definitely closer to self sufficiency, but we are still not there. Here’s a breakdown:

Animal products (eggs, meat, dairy) –  We definitely get more eggs then we know what to do with. We haven’t bred our goats yet (waiting until October) and one of our rabbits is due to have a litter within the next 5 days. That said, even when we are up to full production we will not be self sufficient because we are still having to buy feed. We just don’t have enough space here to grow all the feed that they need.

Compost – Yes! Finally! Between kitchen scraps, yard waste and livestock manure we are finally self sufficient in fertilizing the soil.

Shelter – Nope. We have a mortgage. If we pay the mortgage off we still have taxes and insurance. Damn the man! J/K. So to pay for the mortgage we are required to have jobs.

Energy – No. We really would love to go solar. However, we really don’t use very much (we actually use mostly natural gas) and the permits in our City are prohibitively expensive – sometimes upwards of 30% of the cost of construction. We do what we can to be as efficient as possible, but it won’t be until we move to another home, outside of this city, that we will be able to do solar.

Now a word about self sufficiency – and most likely a very unpopular viewpoint for many. I was asked recently what I thought about self sufficiency and if it was possible to achieve. This was really the first time I ever really sat down and thought about it thoroughly. I now have two admissions. The first is that we are trying to be as self sufficient *as possible.* The second one, and one of the hardest ones for a lot of people to swallow, is in our society 100% self sufficiency is unattainable. Unless you are a squatter that lives in a shack that you built all by yourself and can make everything yourself, even though there is not enough time in a day, you will always have to rely on someone else to do or make at least some things for you. Even if you get used clothes, that garment still had to be made by someone else.  If you’re on the internet you had to rely on someone to make the computer you are using. 100% self sufficiency means that you are completely autonomous and do not require any outside aid, support or interaction. I don’t know, that doesn’t really sound all that appealing to me. I guess it could be if you were the Unabomber, but even he wasn’t 100% self sufficient, he was just crazy. So for what it’s worth, strive to be as self sufficient as possible! But just don’t feel like you have to reach 100% or you will make yourself crazy.

2 thoughts on “Self Sufficiency…Where are We Now?”