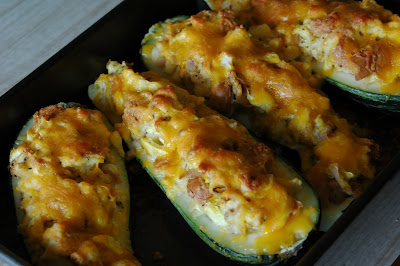 I suppose I should actually title this post “What to Do with Too Much of a Good Thing”, but I don’t think that’ll fit in the title box. Still, it’s an appropriate title.

Zucchini is delicious. It’s one of the first “summer” veggies that come up in our climate (San Francisco/Bay Area), and I’m always planting a few more plants than we need, just because I’m DYING to get some big green monsterplants growing in the spots where the winter and spring veggies are starting to die out for the season.
Call it impatience for summer. Call it over-ambition. Call me crazy (you really wouldn’t be far off), but every year I seem to start more seeds than I have space. I squeeze extra squashes in-between the rosebushes. I start tomatoes in May. I tide myself over planting more and more lettuce and spinach, eventually having to eat salads every day for months just to make room for the real summer veggies to go in. 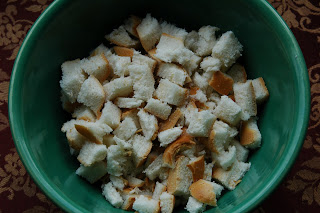 Yes, it’s irresponsible gardening, and yes, I should know better. But sometimes it actually works out. For example, I am hauling in some *lovely* pattypan summer squash and Italian striped zucchini, even while the rest of the garden patiently waits for the (SUPPOSEDLY impending) summer sun. And while I, not-so-patiently, tear my hair out glaring at the tomatoes that are taking their sweet(100) time.
So now here I am, drowning in summer squash. Gone are the days where each prized pattypan is snipped off the stem and flown up the stairs like a little UFO (complete with Jetson-noises). Now we’re bringing them in by the crate full. The zucchini have suddenly grown so large and heavy (I only left them for 3 days!) that they are seemingly inedible. 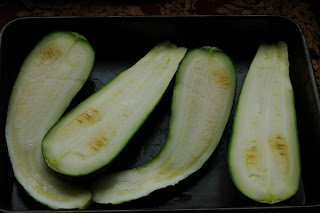 Not so, I am here to tell you. Prepared correctly, these giants are delicious.
Overgrown zucchini hold a special place in my heart. Maybe because they were the only thing the neighbors were always willing to give me out of their prized, well-manicured gardens (hoarding all the reasonably-sized vegetables for themselves). Maybe because it’s just incredible how fast they grow, and how big they get.
Maybe because I would take these behemoths firmly by the neck, haul them up the block, hand them to my mother, and she would turn them from something that could best me in a fight into something remarkably tasty.
Over the years I’ve adapted this recipe many times for many occasions (including serving a massive 2 1/2 footer one year for Thanksgiving), but it never fails to impress. 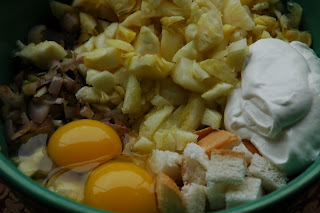 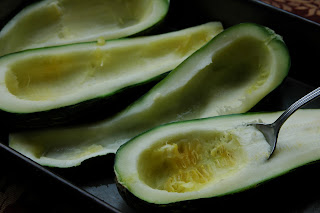 Prepare the zucchini for baking by trimming off the stem and blossom ends, and finding a large stock pot that the squash will fit into, and float it in enough water that it is not touching the bottom of the pan. You CAN cut the thing in half if you must, but the presentation is far more impressive if you can serve it whole. Par-boil the zucchini until just under-done.
Because they vary in size, I can’t tell you exactly how long it will take to par-boil the zucchini. A fork stuck tines-deep in the thickest part of the vegetable ought to give you a good idea when it’s done (it should be firm, but starting to soften in the middle – call it “al dente”).
While par-boiling the squash, you can start to prep your other ingredients. Roughly dice the shallots/onion and mince the garlic. Lightly sauté them until the shallots are just beginning to become translucent. They should still have a bit of crunch.
Cut your bread into 1″ cubes (you can use leftover challah rolls, or even crumbled cornbread here – anything bready and absorbent). You want about 3 cups of bread, total. 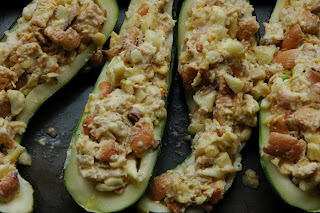 When the zucchini is out of the bath, let it cool for a while until you are able to handle it easily. Cut the squash lengthwise, making two “boats”. If the middle is still too hot to handle, let it sit for a while longer. Once it is cool enough, take a spoon and scoop out all of the center of the squash (seeds and all), transferring it into a large bowl. You will see a natural separation between the walls of the zucchini (about an inch thick) and the seeds/pulp. Use that as a guide for your scooping, though if the walls are very thick, you can pull out some of that part too.
If the pulp is in large chunks, break them up or chop them to be bite-sized. Mix them with the bread cubes, onions/garlic, eggs, sour cream, and 1/2 c of cubed or shredded cheese to make a sticky stuffing. Season with salt, pepper, and sage. 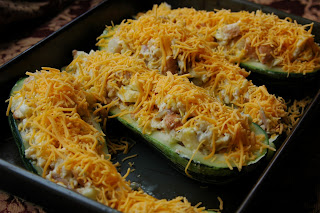 Placing the zucchini “boats” into a large pan (preferably a cake pan or something with sides to support the structural integrity of the squash while it’s baking), stuff them with the filling, heaping as much as will physically pile on top of each piece. Squish it down into a solid mound and make sure there are no air bubbles, and then sprinkle the whole thing with a gratuitous amount of cheese. Or, you know, a modest amount. If that’s your thing.
Bake at 350 degrees for around 30-40 minutes, depending on size and how soft the squash was after par-boiling. The walls should be soft to the touch, and the stuffing should be the consistency of a soft bread pudding. The obscene amount of cheese (because really, who would be modest with cheese?) should be bubbly and browning on the top. 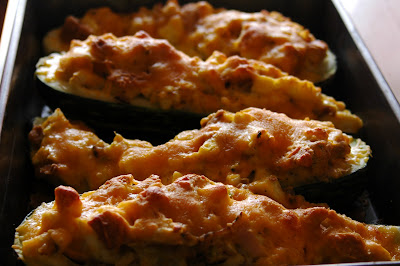